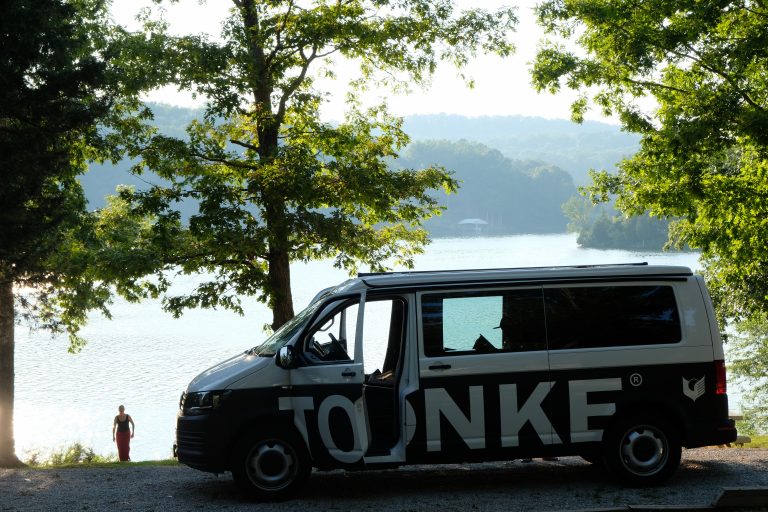 On our way there were trailer homes with trump and real-estate-for-sale signs. The campsite was big and spacious. It was extremely hot and humid, and the voices of the people had that ‘southern drawl’, that is both comforting and alarming at the same time. It was truly weather for cold beers. And that’s precisely what the fishermen drank. A speedboat got caught in some nets or lines, and although this happened further down the lake, perhaps more than a mile away, we could perfectly understand what was said both in words and tone.

Everybody on the campsite had a big new truck, a gun, a boat, an enormous trailer, kids and a golf cart. The truck was used to pull the boat out of the water (nobody left their boats in the water overnight) and the cart was used for all other transportation on the site. Walking seemed prohibited. One couple did apparently not have a cart nor a bathroom, and during the early morning the husband rode his wife 4 times to the bathroom with his 6 liter V8 truck. The bathroom was no more than 300 feet away from their trailer.

Most people seemed to be doing good, but somehow had the idea that it was necessary to be angry at everybody that was not precisely like them. Strangely enough we could identify with that feeling, happy to travel further, but also thankful to understand more of the American soul.

(Later on we met people on the pacific shore collection stones and shells. According to them the Americans were mislead by the corporate world. They made people purposely hooked on television, petrol, fat and sugar. And although there is a dislike for conspiracy theories sure enough something has gone terribly wrong).